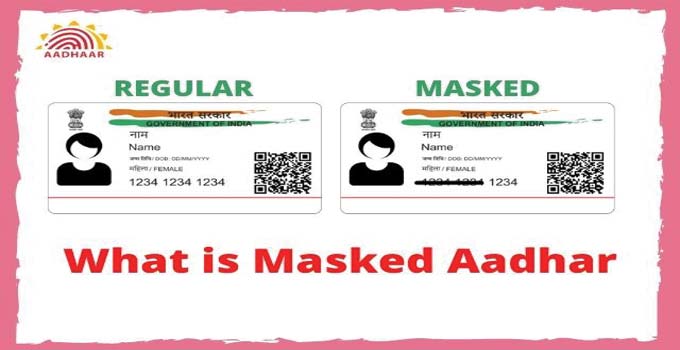 UIDAI has introduced a new Masked Aadhar concept for better privacy. Earlier, the resident has to share his 12-digit Aadhar number as document proof. But, now with the introduction of the new masked Aadhaar, any resident can submit his masked Aadhar instead of the regular one.

In this article, We will talk about the masked Aadhar card and know everything about it. Starting from the definition of masked Aadhaar to the process of downloading it one, we will be cover every aspect of it. Let’s start.

What is Masked Aadhar?

A masked aadhar is same as the regular e-Aadhar that you download from the UIDAI’s official site. The only difference is that in the masked aadhar, the first 8-digit of your Aadhar Number is hidden with a cross mark on it and the last 4-digits are visible.

This version of aadhar card in which the first 8-digits of UID is crossed is known as masked Aadhar. You can download it online and it is accepted everywhere.

Step 4: Select the option, ” I want a masked Aadhaar?”

Step 5: Enter the captcha code given in the image.

Step 7: You will be taken to another web page and an OTP will be sent to your Aadhar card linked mobile number.

Step 8: Enter the OTP received and complete the quick survey. You can also enter TOTP which can be generated using the mAadhar app.

Note that the masked Aadhar is password protected and its password is first 4 letter of your name and the last 4 digits is your birth year. And the aadhar card registered mobile number is mandatory to download masked aadhar online via UIDAI site.

Step 1: Download the mAadhaar app from the Google Play store.

Step 2: After the downloading completes, install the mAadhar app on your smartphone.

Step 3: Launch the mAadhar app and sign into it by entering your mobile number.

Step 8: Type the security captcha code and click on the “Request OTP” option.

Step 9: An OTP is sent to your Aadhar card mobile number. Kindly, check it and enter the correct OTP.

Step 11: Finally, click on the “Open” option to see your masked Aadhar card.

Done, your masked Aadhar is now saved in the PDF format. You will be asked to enter the password for opening it. That’s it, these are the two genuine methods through which you can get your masked Aadhar. And for those who are looking for unmasked Aadhar, you can download the regular e-Aadhar for this.

Talking about the masked Aadhar acceptability or validity, it is digitally signed by UIDAI in the same way as the regular e-Aadhar is done. So, the masked Aadhar is a valid document which is accepted wherever the normal adhar card is accepted. However, there may be some cases where the masked aadhar will not be valid like some banking purposes, passport etc.

The password of the masked Aadhar is of 8 letters consisting of the first 4 capital letter of your name printed on the Aadhar card and the last 4 character is your birth year. For example, if your name is Tony Stark and DOB is 1 January 1998 then the password is TONY1998.

How can I download masked Aadhaar without mobile number?

What are the benefits of using masked Aadhar?

You can use the masked Aadhar instead of the regular Aadhar card and protect your Aadhar number from getting leaked or misused.

What is the difference between masked Aadhar & regular Aadhar?